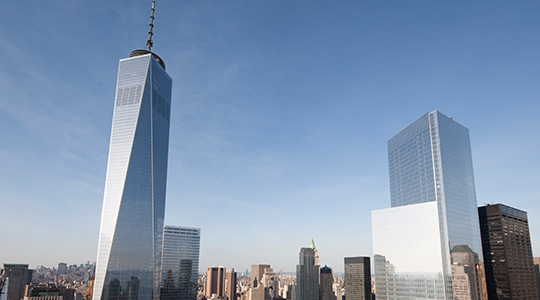 1 World Trade Center, a Pillar of Resilience, Is Open for Business

More than 13 years after a terrorist attack destroyed the twin towers — soaring symbols of New York City’s might, financially and structurally — the first employees of the first tenant in the building erected to take their place arrived on Monday for their first workday.

At 1,776 feet in height, the building is steps from where the north tower stood until Sept. 11, 2001. But where that sunny morning held a still-summery promise until the first jetliner lacerated 1 World Trade Center and smoke filled the jewel-blue sky, Monday was chilly and windy as employees of the magazine publisher Condé Nast arrived.

They walked under the lobby’s high ceilings, adorned in white marble from the same quarry as the old towers — one of the many details that will remind them that their new workplace has an unavoidable connection to that day, and to the pledges of renewal made by elected officials and ordinary citizens alike.

In the lobby of the new building. The lobby is adorned with white marble from the same quarry that produced the marble in the old twin towers. Credit Nancy Borowick for The New York Times

There was an awareness, too, of apprehension, reinforced by the comedian Chris Rock on “Saturday Night Live” less than 36 hours earlier. Referring to 1 World Trade Center as the Freedom Tower, he said: “They should change the name from the Freedom Tower to the ‘Never Going in There Tower,’ because I’m never going in there. There is no circumstance that will ever get me in that building.”

“I can understand the fear behind it,” said a Condé Nast employee, Vijay Ramcharitar, 25, whose new office is on the 21st floor.

But he was resolute about going to work. “If you live in fear,” he said, “you can’t get anything done in your life.” He called the building “an inspiration” and said it was “cool” to have a place there.

Margo Coble, 42, who works in marketing for Condé Nast, said her mother had mentioned that she was “a little bit nervous” about where Ms. Coble was going.

“I told her, ‘This is probably the safest building in New York,’ ” Ms. Coble said.

Condé Nast’s chief executive, Charles H. Townsend, pulled up to the south entrance in a Mercedes-Benz limousine as his subordinates walked in. If they had arrived in cars with drivers, they could not have turned onto Vesey Street — retractable metal bollards have been installed in the pavement to block access.

They were up on Monday morning, and police officers had been posted around the building. And the employees who entered the Vesey Street door flashed an identification pass; they flashed it again when they reached the turnstiles that control access to the elevators.

Austin D. Parker, who works for an audiovisual installation company hired by Condé Nast, said employees had been steeped in security protocols and procedures. He said he had been given instruction in escape routes.

“At the beginning you start going, ‘What are you doing here?’ ” he said. “Then you get to understand the building, and pay homage to its history.”

The company’s arrival was an extraordinary moment that passed in the most ordinary of ways, as employees simply walked in and took elevators to their floors. There were no ribbons being cut, no marching bands playing and no elected officials giving speeches, in part because Gov. Andrew M. Cuomo had campaign appearances elsewhere.

The view of Manhattan from the 102nd floor of 1 World Trade Center. Credit Nancy Borowick for The New York Times

The workers are what the company calls corporate employees, meaning that they do not work for any one of its magazines in particular. Some work in human relations, some in accounting.

Glamour? It will come later, as will Vogue, Vanity Fair, The New Yorker and Condé Nast’s other magazines.

It was the culmination of 13 years of unusually public squabbles over architects and designs; of political jockeying and bureaucratic bickering; and of complicated construction work.

For many people in Lower Manhattan, Monday was the day to acknowledge the reknitting of the trade center site into the fabric of the city. At the sidewalk level, the area immediately around it had been off limits for so long that 1 World Trade remained somewhat remote, even as thousands of workers rushed by on their way to offices in the complex across nearby West Street that was known on Sept. 11 as the World Financial Center. (It is now called Brookfield Place.)

Construction on 1 World Trade Center began in 2006, and the statistics were monumental. The building’s exterior cladding contains enough glass to cover 20 pro football fields. The building has as much steel as in 20,000 cars and enough concrete for a four-inch-thick sidewalk from New York to Chicago.

The new building is steps from a memorial honoring those who died in the attacks. There is a museum with a large image of the twin towers in a window that tourists press their faces up against. Closer still is the north pool, which is ringed, above its 30-foot-deep water wall, with names of the victims.

But there are signs of the resurgence in Lower Manhattan: A banner on a building promotes condominiums on the top floors of a luxury hotel.

Condé Nast, which said in a statement that it was “proud to be a part of this important moment of renewal for the city,” is leasing 24 floors at 1 World Trade Center. The 175 employees who moved in on Monday were the first wave of the company’s work force.

If the first day in new quarters is about everyday questions — Is the commute longer or shorter? Is the coffee wagon on the corner any good? — the Condé Nast employees saw something familiar as they went to work. Near one of the entrances is a shop that sells magazines, with the Condé Nast titles on display.

The shop also sells sodas and snacks — and, for $24.99, something they could put on their desks as a reminder of where they are: a little model of their new building.