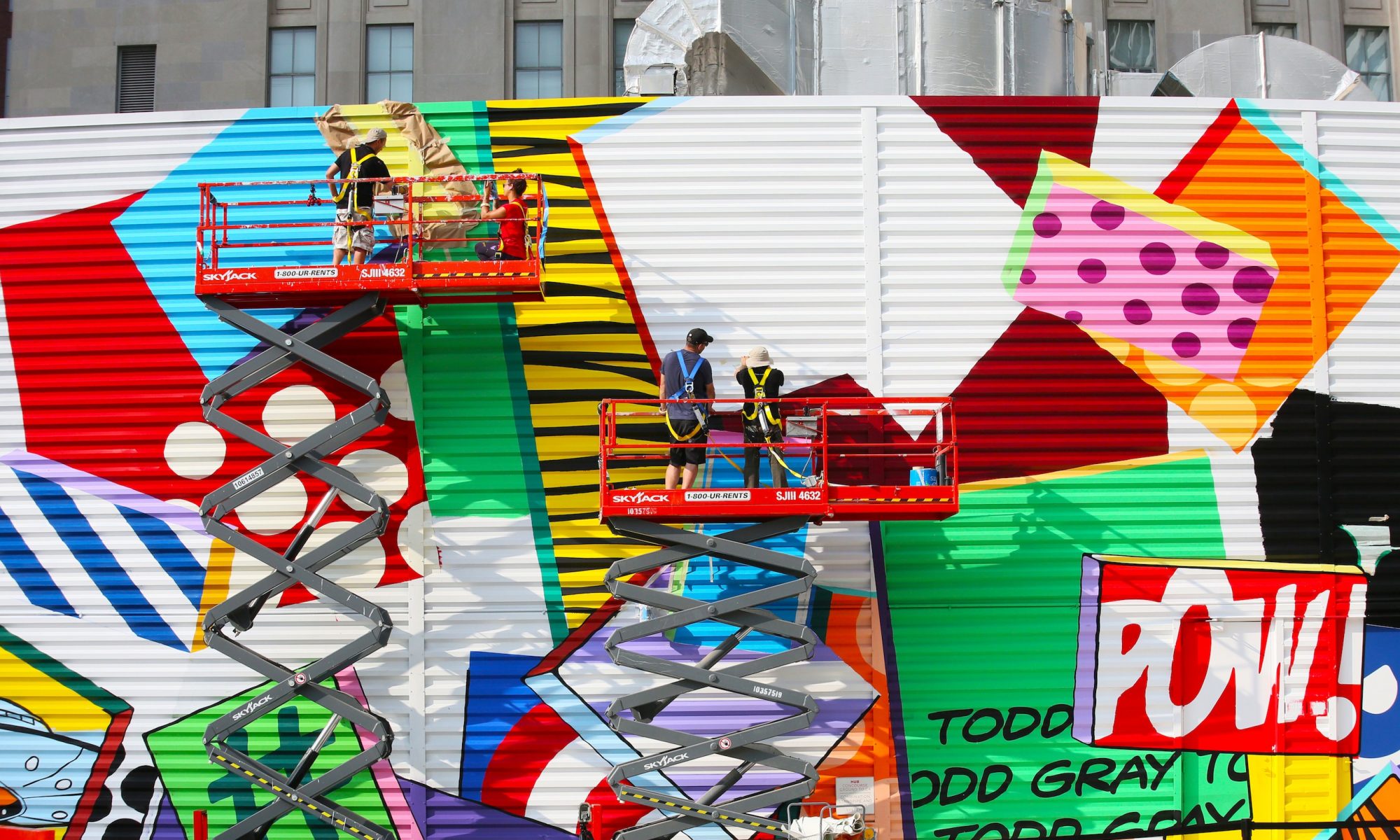 Two years ago Silverstein Properties invited street artists to emblazon an empty floor in one of its office buildings at the World Trade Center site. Now, in a partnership with the Port Authority of New York and New Jersey, the developer has given artists a nearby public place to display their talents. Their new canvas is a collection of corrugated metal sheds — bringing a 5Pointz vibe to Lower Manhattan.

The sheds, on the site bounded by Greenwich, Vesey and Church Streets and the Oculus transportation hub, house mechanical equipment that will one day service 2 World Trade Center, a Silverstein office tower on hold while the developer searches for an anchor tenant. (Nearby, 3 WTC, designed by Richard Rogers and his firm Rogers Stirk Harbor + Partners, is set to open June 11.) Rick Cotton, the executive director of the Port Authority, which owns the World Trade Center campus, suggested asking artists to enliven the shed exteriors to help give the area a more “finished appearance,” he said in an interview. Larry A. Silverstein, chairman of Silverstein Properties, agreed.

Selected artists each received $1,000 for paint and a $2,000 honorarium. They have been up on ladders and scissor lifts spraying and daubing paint in view of tourists and downtown office workers. Six murals are completed or nearly done; two more are expected. All the works will be on display for at least a year.

Working at the World Trade Center site, where the twin towers stood until the Sept. 11 terrorist attack, carries an emotional gravity, and artists grapple with the enormity of that loss. But many spoke of a determination to balance the loss with art that lifts the spirit.

The Australian illustrator known as Brolga got his start as a street artist while attending Pratt Institute and living in Williamsburg, Brooklyn. In his spare time he spray-painted his life-size characters onto posters that he plastered throughout his neighborhood. Moving on to murals, he caught the eye of consultants helping curate Mr. Silverstein’s previous art project. For his current effort, the 31-year-old artist sought to broadcast a message of vibrancy and joy using colorful images like a toucan and three-eyed tiger. “The history of the area is quite emotionally heavy,” he said. “I wanted to create a contrast and do something uplifting.”

Todd Gray’s creations have been typically for indoor enjoyment. For more than three decades this Los Angeles based artist has made paintings and sculptures that draw inspiration from 1960s Pop Art (while also running a candy-machine empire and starting a cabinetmaking business). Mr. Gray, 55, was eager to work on a larger scale but admits to being nervous when he got his first look at the 65-by-25-foot facade he was assigned at 2 World Trade Center. But once he started his collagelike mural, an adaptation of a sculpture that samples Warhol- and Lichtenstein-esque graphics, he said he found it “surprisingly peaceful to work with a quarter million people buzzing by from all over the world.”

Korean-born Joohee Park, 37, acquired the name Stickymonger because she often uses cutouts of adhesive-backed vinyl to conjure up fantasy worlds in her art. But stickers were of no use on her swath of corrugated metal facing the Oculus. Lower Manhattan’s role as a transportation hub inspired her “Cosmic Traveler,” which depicts a girl on another planet “who has found a magic portal through which she can see from her world to ours,” Ms. Park explained. Her character swipes a hand across the window so she can see better — a gesture that also looks like a wave.

As Chinon Maria, 33, and Sebastian Mitre, 35, were painting “Vesey Street in Bloom,” strewing it with roses in pinks and reds, their own love story was unfolding. While working on the mural they were engaged; last weekend, they had their wedding in Ms. Maria’s native Vermont. The mural, inspired by old Lower Manhattan street signs, is an extension of Ms. Maria’s longstanding commitment to using her art to enliven and, she said, “bring a stronger female narrative” to public spaces — a goal shared by Mr. Mitre, who has a background in theater and now serves as his wife’s manager and mural co-creator. Another of their public murals, “One World, Our Children,” is in Albany Plaza, just a couple blocks away.

Risa Tochigi, known as Riisa Boogie, has created murals in Brooklyn, Denver and Poughkeepsie, N.Y., where this Japanese-born artist now lives. But painting on corrugated metal, she said, is tough. “Instead of doing one stroke, it’s three strokes” — top, middle and bottom surfaces, she pointed out. “And I have to lighten areas where the raised metal casts a shadow.” Positive feedback from passers-by to her central figure, a girl embracing cartoon characters, powers her on, with her co-creator, Rezones. An elderly Japanese gentleman told Ms. Tochigi that he felt honored by her work, and a woman said their bright colors — in such a solemn spot — brought tears to her eyes.

By Tuesday afternoon Hektad, a graffiti pioneer, had already gone through some 300 cans of spray paint to complete “Amor es Amor” — a mural of layered hearts. The 48-year-old Bronx native hoped that his message of love — a common theme in his work — would act as a salve for those who pass by after paying a visit to the National September 11 Memorial & Museum. “Hopefully as people leave the area this will make them feel a little better.” At least his current canvas wasn’t moving, like the subway cars he used to tag back in the 1980s.