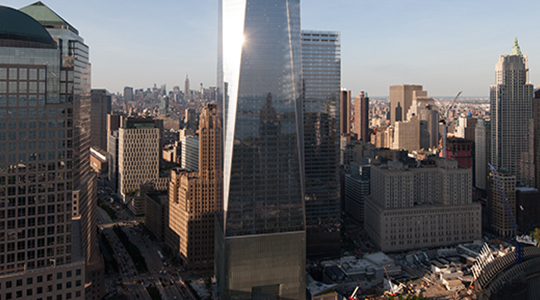 It was the first wave in the migration of what will be 3,400 editors, writers and advertising executives at 18 magazines from Condé Nast moving to the World Trade Center, confirming both the long-awaited reconstruction of the complex and a shift in the culture downtown.

As the first 175 employees enter the lobby of the 104-story tower on Monday morning, they will be settling into a remade neighborhood no longer dominated by investment banks.

Technology firms, advertising agencies and media companies have moved downtown as the number of financial institutions has declined. Luxury retailers, like Brooks Brothers, Saks Fifth Avenue, Salvatore Ferragamo and Tiffany & Company, have opened shops. The residential population has swelled to 61,000 from practically nothing.

Many of the construction fences and scaffolds that obscured the views and darkened the streets since the 2001 terrorist attack on the trade center buildings have come down, revealing glassy new towers, a transit hub, a vehicle security center and the Sept. 11 memorial.

“Condé Nast’s arrival puts a stiletto in the heart of the outdated notion that Lower Manhattan is stuffy and gray,” said Jessica Lappin, president of the Downtown Alliance, a local business organization. “They will accelerate the transformation that’s well underway and create additional demand-side pressure for more cool restaurants, art galleries and bars.”

On Monday morning, Charles Townsend, chief executive of Condé Nast, will lead the employees, mostly executive and administrative workers, inside the tower, past the discreet silver letters spelling out Condé Nast and over to the elevators. Floor-to-ceiling windows provide spectacular views. There will be little pomp and circumstance, in part because Gov. Andrew M. Cuomo is on the campaign trail and unable to attend. In a statement released on Sunday night, Mr. Cuomo said, “We remember that strength and courage will always conquer weakness and cowardice.”

A more formal ceremony marking the move may happen before the end of the year. It will be February before the company is completely relocated to Lower Manhattan.

Anna Wintour, the editor of Vogue magazine who inspired the novel and film “The Devil Wears Prada,” will move to the 25th floor along with her staff, while Graydon Carter, the editor of Vanity Fair, will take the 41st floor.

Mr. Townsend and the executive suite will be housed on 42.

But Condé’s highest, and presumably most sought after floor, is going to the company’s law firm, Sabin, Bermant & Gould.

Condé Nast is not the first to move into the trade center towers. Last Monday, the Port Authority of New York and New Jersey began moving into its space at 4 World Trade Center, a 72-story tower built by developer Larry Silverstein that opened last year.

But it was Condé Nast’s decision to leave Midtown in 2011 that turned heads, prompting others to consider the same. Since then, Time Inc., another Midtown stalwart, announced it would be moving nearby, to 225 Liberty Street.

MediaMath, a global technology firm, will join the Port Authority at 4 World Trade, and GroupM, a media and advertising firm, has leased space in Mr. Silverstein’s 80-story building at 3 World Trade Center, which is under construction.

For many years, it was unclear who, if anyone, would move into the trade center buildings given the history of the site. Lehman Brothers fled to Midtown, before disappearing during the financial crisis.

Still, the towers are far from filled. One World Trade Center has leased 58 percent of its 3 million square feet of space. Douglas Durst, the developer who is a co-owner of 1 World Trade Center with the Port Authority, expects that Condé Nast will play the same transformational role downtown that it did 15 years ago when the company moved to his tower at Broadway and 42nd Street, 4 Times Square.

Condé Nast’s move from Madison Avenue in 1999 served as an imprimatur that Times Square was finally safe for white-collar workers. Soon came the lawyers, accountants, bankers and others who had avoided the seedy environ. Today, Times Square is choked with millions of tourists as well as performers dressed, or undressed, as Elmo, Mickey Mouse and the Naked Cowboy.

“There’s a certain nostalgia in advance of leaving Midtown,” said David Remnick, editor of The New Yorker, which will occupy the 38th floor of 1 World Trade. “But if it means I’ll meet Elmo a lot less often, it’s all for the better.”

But if 1999 marked a high point for glossy magazines, the migration downtown takes place amid a cost-conscious, less lavish digital era.

Condé Nast spared no expense when it moved its scattered magazines to a single tower. S.I. Newhouse Jr., the company’s chairman, was bringing together its then 17 titles under one roof in a newly resurgent Times Square.

But it also cost a fortune and the flooring had to be replaced twice.

Editors like Mr. Carter of Vanity Fair were given generous budgets to hire their own architects (in his case, Basil Walter) or designers for their corner offices.

This time around, Condé Nast did not bring in a star architect for the cafeteria on the 35th floor of 1 World Trade Center. Writers at The New Yorker will now have to share their offices with a colleague. There are fewer offices with windows and more employees will sit in open rooms.

“It’s not about a Gehry design,” Mr. Townsend said. “It’s about the views. It’s at least 15 percent more efficient, which means a great deal of open space. This is an evolutionary step away from 4 Times Square, where there was still a great deal of individualism expressed.”

The offices for each magazine are largely the same, with the exception of Bon Appétit, which has a set of test kitchens.

“They took away my lap pool, which really upset me,” Mr. Carter joked. “Other than that, we’ll have computers, pencils and good lights.”

Mr. Carter did get a corner office, a budget for decorating and his architect, Mr. Walter. He will also have a desk in the bullpen for Vanity Fair’s website. But it is unlikely that a building will ever be erected that blocks his expansive views, as happened in Times Square.