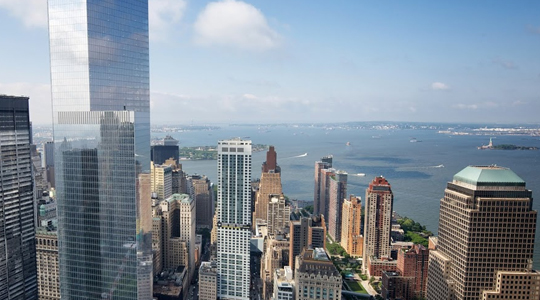 In An Upset, Downtown Leads City in Rent Rises

Asking rents for office space in the area rose 8% in the first nine months of the year, making downtown, long the weakest of Manhattan’s three submarkets, now its standout performer.

Leasing of office space in Manhattan through the third quarter of the year was on pace to set new records, with big deals involving upward of 100,000 square feet leading the charge, according to a report from real estate services giant CBRE Group Inc. Tuesday.

“This is shaping up to be the year of the large relocation,” said Peter Turchin, a broker with the firm. He noted that there had been 25 such deals in the first nine months of the year, more than double the 12 logged last year.

Those transactions were symptomatic of a Manhattan commercial leasing market that is firing on all cylinders this year. Through the first quarter, 5.2 million square feet of space had been leased. That compares with 5.7 million square feet in all of last year. Average asking rents already stand at a new high of $57.78 per square foot.

The downtown market has enjoyed a particularly good year. There, more space has been leased than added to the market in each of the last 15 months, with the sole exception of January, when a big block at 1 World Trade Center hit the market. The leasing activity lowered the availability rate—space either on the market or that will be free within the next year—to 11.7%, just a hair above midtown’s 11.1%.

Meanwhile, asking rents downtown have risen 8% in the past nine months, outpacing the gains seen in the other two major Manhattan submarkets, midtown and midtown south.

“It is interesting, as downtown was the market that people had feared for the most, but it is the one that has seen the biggest growth in asking rents,” said Mr. Turchin. Those gains have come despite the huge amount of space that has entered the market at the World Trade Center site and the massive vacant space across West Street at Brookfield Place, where millions of square feet have been leased this year. Leasing has also been strong over on Water Street, particularly at 1 New York Plaza and 199 Water St.

Now downtown stands on the brink of major additions to its stock of retail space. Roughly 600,000 square feet will come on line at Brookfield Place and the World Trade Center in the next year. Demand for that acreage has been high. Among others, Saks Fifth Avenue will open its first downtown outpost at Brookfield Place, and Nordstrom is reportedly shopping around for a space elsewhere in lower Manhattan. The strength of the appetite for space among department stores is being buttressed by the arrival of several new chains.

“New York has had the same collection of high-end department stores for years,” said Andrew Goldberg, a retail broker at CBRE. “We’ve had the same eight [stores] for years, and now in one year we are getting four more.” They include Neiman Marcus and Nordstrom.