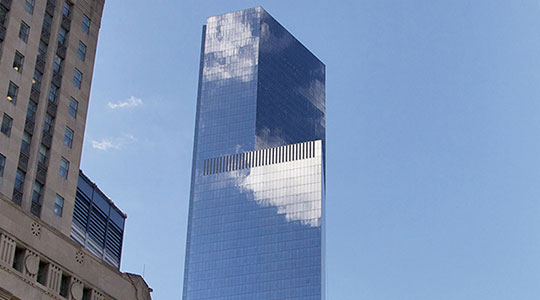 Investment Research and Media Firm Morningstar Signs on at W.T.C.

Morningstar signed a 10-year lease and is expected to move to the tower’s 48th floor in the middle of 2015, leaving its current New York location in the Dime Savings Bank Building on Sixth Avenue in Midtown. The transaction brings the tower’s availability rate down to about 45 percent, Silverstein Properties said. The building opened last fall.

Morningstar is the fourth tenant Silverstein has signed for the skyscraper. The city is taking 600,000 square and the Port Authority of New York and New Jersey will lease 520,000 square feet. Tech firm MediaMath has a lease on a 106,000-square-foot space.

While the deal with Morningstar is not a huge one for the 2.3-million-square-foot super-tall, the Chicago company is definitely the sort of tenant Silverstein and other downtown business owners have been searching for. The so-called TAMI sector—meaning technology, advertising, media and information—is seen as the future of Lower Manhattan, ending an era during which the financial sector made the neighborhood run. Morningstar, which is also an investment management firm, straddles both worlds.

Joe Mansueto, chairman and chief executive of Morningstar, praised the design of the building in a statement released to press and talked a bit about the company’s plans for the space.

“Moving Downtown allows us to double our capacity for staff in New York,” he said. “We’ll design it like other Morningstar offices around the globe, with an open environment that reflects our culture and our commitment to transparency and collaboration. We look forward to hosting clients in our new space next year.”

Tower four, located on Greenwich Street, adjacent to the National September 11 Memorial and Museum, was designed by architect Fumihiko Maki. It is the second new World Trade Center building to open since the 2001 terrorist attacks, following Silverstein’s 7 World Trade Center.

The anchor building, 1 World Trade Center, is expected to open some time this fall with Condé Nast as its major tenant. The 1,776-foot-tall building, the tallest in the western hemisphere, was built in a joint venture between the Port Authority of New York and New Jersey and Durst Organization.

Work is underway on Silverstein’s 3 World Trade Center, which has had been delayed by funding issues. The Port Authority agreed this year to modify a subsidy agreement with Silverstein, who expects to have all the needed financing lined up by the end of the year. Tower two, which would be constructed next to 1 World Trade Center, does not have any tenants yet and no set timetable for construction.