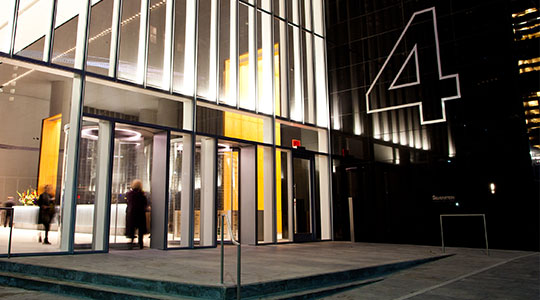 Other tenants at 4 World Trade Center include the Port Authority of NY & NJ, MediaMath and the city.

NEW YORK CITY—Another tenant has signed onto the World Trade Center complex in a relocation that is also an expansion, quadrupling a company’s existing office space.

“The new World Trade Center is open and great companies want to be here,” says Larry Silverstein, chairman of Silverstein Properties, which owns and operates the building. “After all the years of planning and building, the future has finally arrived at the World Trade Center, just as Lower Manhattan is reaching its full potential as the world’s most dynamic and modern live/work community.”

“We’re excited to expand our footprint in New York by leasing space in such a beautiful building,” says Joe Mansueto, chairman and CEO of Morningstar. “We conducted an extensive search, and we love the building’s design. Moving Downtown allows us to double our capacity for staff in New York. We’ll design it like other Morningstar offices around the globe, with an open environment that reflects our culture and our commitment to transparency and collaboration. We look forward to hosting clients in our new space next year.”

“Morningstar’s decision to move to 4 WTC is part of a trend of smart, creative and growing companies moving Downtown,” adds Janno Lieber, President of World Trade Center Properties. “These firms want to be in new, high-tech, green buildings right next to the best mass transit in the city and ultra-convenient to the Brooklyn Lower Manhattan and New Jersey neighborhoods where young talent is choosing to live. That’s why more than five million square feet of office space has already been leased in the new WTC.”

According to the Downtown Alliance, 511 firms have moved to Lower Manhattan since 2005, leasing a total of 12.3 million square feet (1.14 million square meters). 226 of those companies have been in creative or professional services, taking 51% of the space leased.

“More than 500 companies have relocated to Lower Manhattan over the past several years,” asserts Alliance for Downtown New York president Jessica Lappin. “Lower Manhattan’s pull on firms in the world of finance and media shows no sign of weakening. We’re thrilled to have Morningstar in our diverse and dynamic business district.”