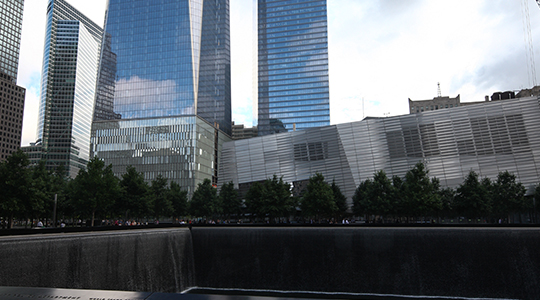 The tone was bittersweet Monday morning at One World Trade Center, where office employees for the first time arrived for work at the skyscraper that stands near where the Twin Towers fell in 2001.

“Considering what went on here 13 years ago, it was very tragic, but we are going forward and I think it’s wonderful to have this opportunity to work in the biggest building in the western hemisphere,” said Mary Ann Casey, a paralegal heading into the new building.

Ms. Casey is among 175 people who work for Condé Nast or its corporate affiliates and who have moved into the 104-story tower. Ultimately, some 3,400 employees of the media company will move into the new offices over the next several months.

The $3.9 billion, 1,776-foot skyscraper overlooks the National September 11 Memorial Museum and the memorial plaza’s reflecting pools in the footprint of the Twin Towers.

The design of One World Trade was both practical and symbolic, “like the Washington Monument, a real marker for downtown but a very distinctive building, like a lighthouse would be at the end of an island,” said the building’s architect, David Childs, a consulting design partner at Skidmore, Owings & Merrill LLP.

“We built the beehive, but to see all the bees coming and going and being active is exciting,” Mr. Childs said. “It’s not an empty building but you have a real city.”

Officials who spoke to reporters focused on the building’s power as a symbol of resilience and remembrance.

One World Trade Center is “the safest class A office space any place…in the world,” said Patrick Foye, executive director of the Port Authority of New York and New Jersey. He said that the building’s security was devised in consultation with federal, state and local law enforcement agencies, including the Federal Bureau of Investigation and the U.S. Department of Homeland Security.

Jessica Lappin, president of the Alliance for Downtown New York, said the building’s opening showed that “our way of life, our determination to carry on, to write, create and speak our minds, would not be cowed by the evil that visited us that dark day 13 years ago.”

The moment was poignant for Chris Mitchell, publisher of Condé Nast’s Vanity Fair, who has yet to move into the building but arrived at the tower Monday for an early morning meeting.

“To me, it’s really coming full circle,” he said. “That was such a tragic day and this is such a day of promise.”