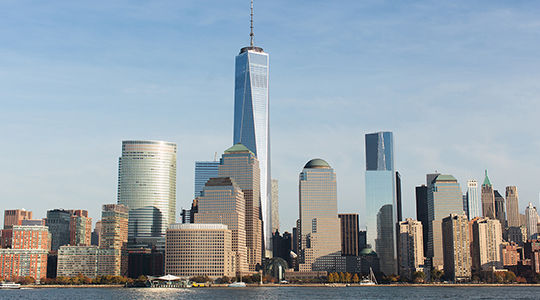 Yogi Berra’s eloquent observation, “Nobody goes there any more, it’s too crowded,” applies to the new World Trade Center. The only ones staying away are smarter-than-thou pundits who have no idea what they’re talking or writing about.

A visit to the WTC reveals gazillions of people swarming over every walkable square foot. They stroll over as much of the 16 acres as construction and security barriers allow, gaze up at the skyscrapers, photograph loved ones and, yes, touch the 9/11 victims’ names engraved around the memorial pools.

It’s a wonder, because the new WTC is barely half-finished and large sections remain impassable. The two completed office buildings are as yet little occupied. Stores, restaurants, and the 100th-floor observatory won’t open until next year. Neither will the Santiago Calatrava-designed Transportation Hub.

There are no public toilets. There’s barely a place to sit — the memorial ground benches are too low for settling in.

Yet the place swarms with life even on raw December days. Take Cortlandt Way, the new Cortlandt Street extension that’s barely an alley scrunched between 4 WTC and the 3 WTC construction site.

Nobody minds that it’s buried under, and narrowed by, a jungle gym of scaffolding. Everyone’s thrilled silly that a “street” now runs through the WTC, unlike at the old Twin Towers superblock.

Delighted visitors know something the city’s architectural and urban-affairs intelligentsia don’t: The politically warped, ideologically conflicted and bureaucratically hamstrung 13-year redevelopment saga since 9/11 improbably brought forth a much better result than we had a right to expect — or than we deserved. The abundant goodwill that went into planning narrowly carried the day over equally abundant greed and venality

Learned cranks bemoaning the site’s architecture, politics and commercial-commemorative tension ought to pipe down and consider how nobody else seems to care.

The complex had to integrate a vast, solemn and cathartic memorial with millions of square feet of office space and a gargantuan transit station. The “another lost opportunity for greatness” crowd deplored the transmutation of Daniel Libeskind’s radical vision (remember knife-edged towers and 80-foot-deep exposed slurry walls?) into something more rational — normal office buildings and train station aligned in an L around a street-level memorial park.

What looked boring on paper is turning out to be captivating in reality. Even in its partly inchoate state, the new WTC is so ridiculously popular, it’s scary to think how overrun it will be when it’s finished.

Visitors to the memorial — 16 million since it opened in 2011 — increasingly means visitors to the World Trade Center. They stare enraptured at Fumihiko Maki’s gossamer-skin 4 WTC, which seems to vanish in the clouds, and at the spiky Hub crouched like a prehistoric bug at the foot of rising 3 WTC.

It might take years for New Yorkers to fully embrace it, but the rest of the world isn’t waiting. Close friends who were my next-door Manhattan neighbors until they moved to Florida a few years ago recently set me straight.

“We came up out of the Fulton Street station and our eyes popped out,” said my friend, an acclaimed photographer who often returns to the studio he still keeps here but had not been downtown since when 1 WTC was a stump. “No matter what you guys write, everybody in the world is going to love it. Even the dinosaur.”

He means the Hub, which I’d ridiculed as the “Calatrasaurus.” And he was correct. Most of us fortunate to have a media voice liked some elements of the WTC project but not others. If public taste is any indication, we were all wrong about the ones we hated.

The WTC crowds include tourists of course, but they’re not Times Square’s Big Mac-munchers. They admire the architecture and revel in Elmo-free people-watching afforded by the site’s open pedestrian circulation.

It won’t be long before locals fall in love with it, too.

Conde Nast staffers and other New Yorkers moving to 1 WTC have discovered a soothing oasis on their doorstep — the 9/11 Memorial that’s blossomed from its mordant conception into an easygoing public park. They’ll soon have a three-minute walk to a 40,000-square-foot Eataly and stores from Banana Republic to Turbull & Asser.

Of course, many deep thinkers regard the WTC’s various creators as hacks, profiteers and aesthetic vulgarians. A column in The New York Times this month by architect Steven Bingler and journalist Martin C. Pedersen called out the “Architecture of the capital ‘A’ variety” for falling out of touch with popular sensibility, and assailed an “archipelago of graduate schools, magazines and blogs that reinforce our own worldview.”

Their essay didn’t mention the World Trade Center, but they might have had it in mind. The “archipelago” includes wiser-than-thou architectural critics. The Times’ Michael Kimmelman thinks 1 WTC’s “monomoniacal” design stinks. His perception of it as a neofascist obelisk — “General MacArthur in aviator sunglasses” — can only baffle those who find its soft skyline profile almost too polite.

Piling on poor 1 WTC, environmental writer James West complains in Mother Jones that it isn’t as “green” as was promised. “What went wrong?” he demands.

Karrie Jacobs in Architect magazine, the publication of the esteemed American Institute of Architects (AIA), complained that the memorial has “too many visitors” and doesn’t offer “tranquility’ — yet contradictorily asserts it “lacks the energy typical of the city’s best public places.”

National Review’s Christine Sisto coldly dismissed the magnificent 9/11 Memorial Museum as a “failure” and “just a bunch of broken eyeglasses and dust-covered bicycles.”
Even nonideological real-estate reporters get into the act, proclaiming both 1 WTC and 4 WTC failures for “slow leasing” — even though both will likely be full within two years despite the site’s tormented history.

And of course a genius named Steve Cuozzo has repeatedly condemned the Hub as “LOL ugly.” But it won’t stop hordes from going shopping soon inside the whale innards-like Oculus big enough to swallow Grand Central Terminal.

Kimmelman regards 1 WTC’s supposed mediocrity as a “cautionary tale” in what happens when a “commercial developer” is “pretty much handed the keys to the castle.” Eh? Larry Silverstein never wanted to build a “Freedom Tower” and cheerfully gave it up to the Port Authority eight years ago.

The real “cautionary tale” is that for certain elites, no new World Trade Center will ever be good enough — no matter how well it accomplishes all it was supposed to, and more than that.