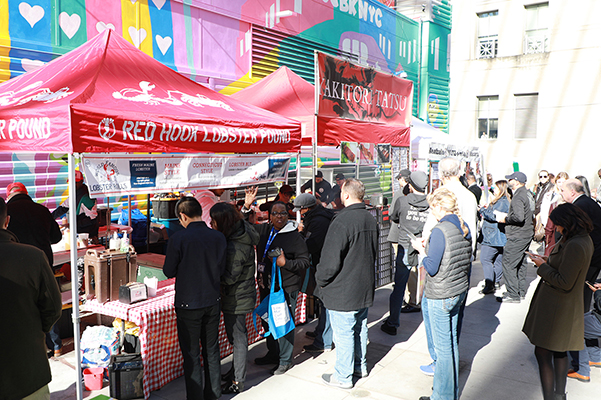 Following a highly successful three-day food festival last November that provided a dynamic new short-term activation on the World Trade Center campus, Westfield and the Port Authority announced today that Smorgasburg – the largest outdoor weekly food market in the United States – will become a weekly fixture on the site beginning on April 12.

Smorgasburg will operate a curated version of its world-class market at the World Trade Center campus from 11:30 a.m. to 7 p.m. every Friday through the spring, summer and early fall, ending on October 25. About 25 vendors will participate, offering a wide variety of food choices for those who work, live or visit the site.

“Every day there is innovative transformation taking place on the World Trade Center campus to provide an uplifting, inviting atmosphere for workers and those who live in the neighborhood,” said Port Authority Chairman Kevin O’Toole. “We’re pleased that Smorgasburg has committed to being part of the site’s revival and we welcome their weekly visits to the site as it continues to evolve into a family friendly destination.”

“Smorgasburg’s visit to the site last fall was a huge success and showed all of our stakeholders that we are committed to making this not only a place of remembrance, but a dynamic, lively and energetic contributor to the community,” said Port Authority Executive Director Rick Cotton. “We all look forward to the food market’s return to the site and the wide variety of diverse cuisine it will bring for both tenants and neighbors.”

“We at Smorgasburg are humbled to return to the World Trade Center and to add to the fabric of such a storied site,” said Smorgasburg co-founder Eric Demby. “Along with our vendors, we hope the WTC and Lower Manhattan communities will look forward to Fridays with eager bellies!”

“Everyone involved with the World Trade Center – from government and businesses to local civic and arts organizations – have banded together to cultivate an environment that is every bit as creative and vibrant as the people who live and work in this revitalized Lower Manhattan community,” said Larry Silverstein, Chairman of Silverstein Properties. “Smorgasburg is yet one more opportunity for visitors from all over the world to experience the new Downtown and enjoy great food at the World Trade Center.”

Smorgasburg was established in 2011 as a spinoff of Brooklyn Flea, and now attracts 20,000 to 30,000 visitors a day to eat from 100 vendors at its Brooklyn markets in Williamsburg and Prospect Park in the spring and summer months, and thousands to its Sunday market in Downtown Los Angeles.

The return of Smorgasburg is part of the Port Authority’s commitment to activate the World Trade Center campus with dynamic community events and activities.

During the first three months of 2019, the Port Authority joined with Westfield in January to bring the Greenmarket, which operated outdoors in the Oculus Plaza for the past two years, to the indoor Oculus for the winter months every Tuesday. And in February, the Port Authority and Westfield partnered on the first ever Lunar New Year celebration on the World Trade Center campus. The multiple Lunar New Year events included a performance by the Asian Cultural Symphony, a 60-piece orchestra, and a Lunar New Year Lion Dance to celebrate the Year of the Pig.

Those events built on numerous initiatives undertaken in 2018 to enhance the campus’ aesthetics and connections to the downtown community. They included: